French is a popular world language spoken by more than 300 million people throughout 5 continents. As the second most widely learned language after English, learning French is inherently valuable and almost universally accepted language. It is not only spoken in France; in fact, 7.2 million Canadians (about 20% of the population) speak French.

Its widespread use and acceptance make it an asset in your child’s education; enrolling your child in French Immersion programs can offer a variety of advantages.

The Value of a French Immersion Program in Canada 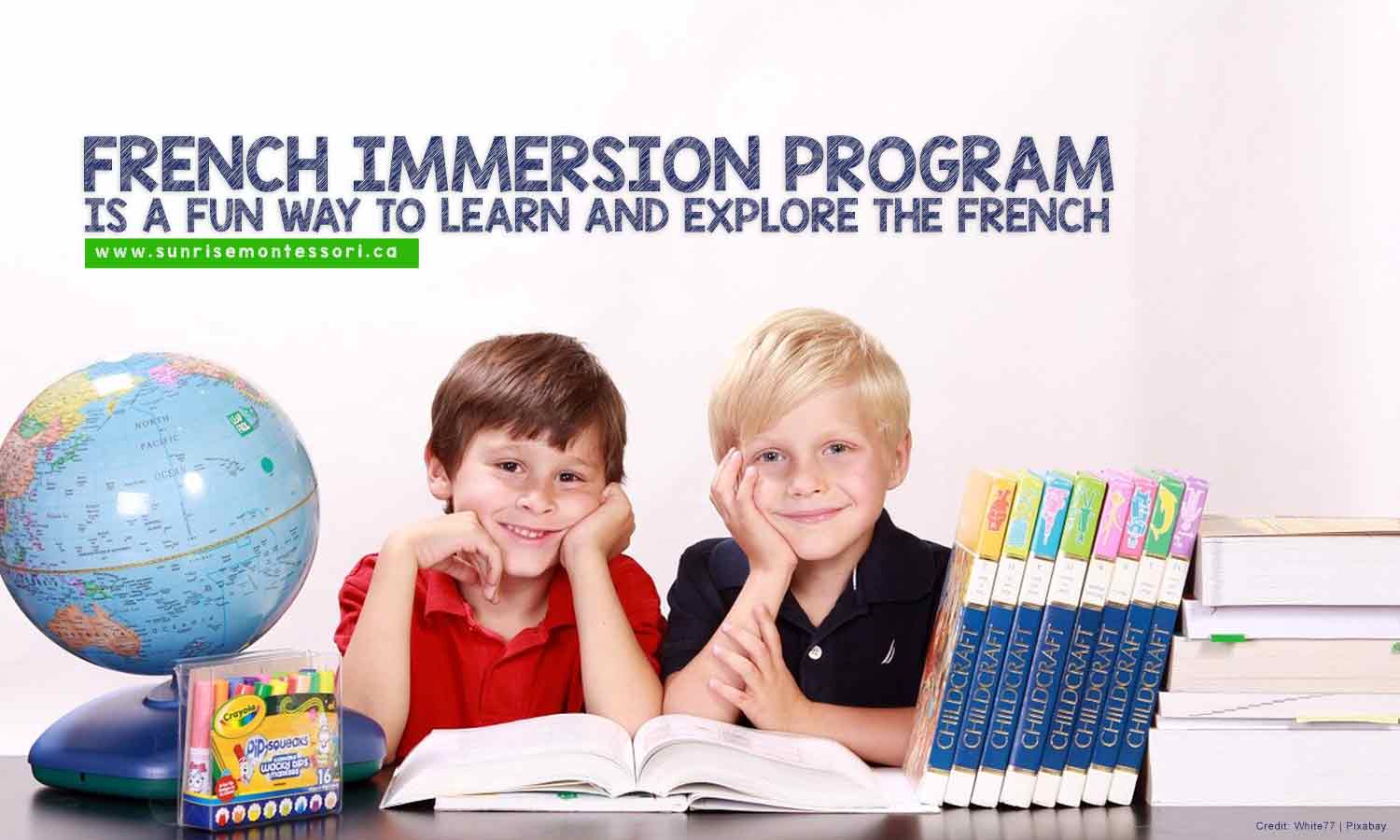 French Immersion is a Canadian-made educational program offered to non-French speaking children. Children are taught and learn in most subjects (like math, science, art, history, music, geography, and physical education) in French.

Canada’s French Immersion program has gained positive attention and spread rapidly in different parts of the world. Although it is optional, many parents have chosen to enrol their children in schools that offer such programs. The French immersion program was developed to:

French in Every Grade Level 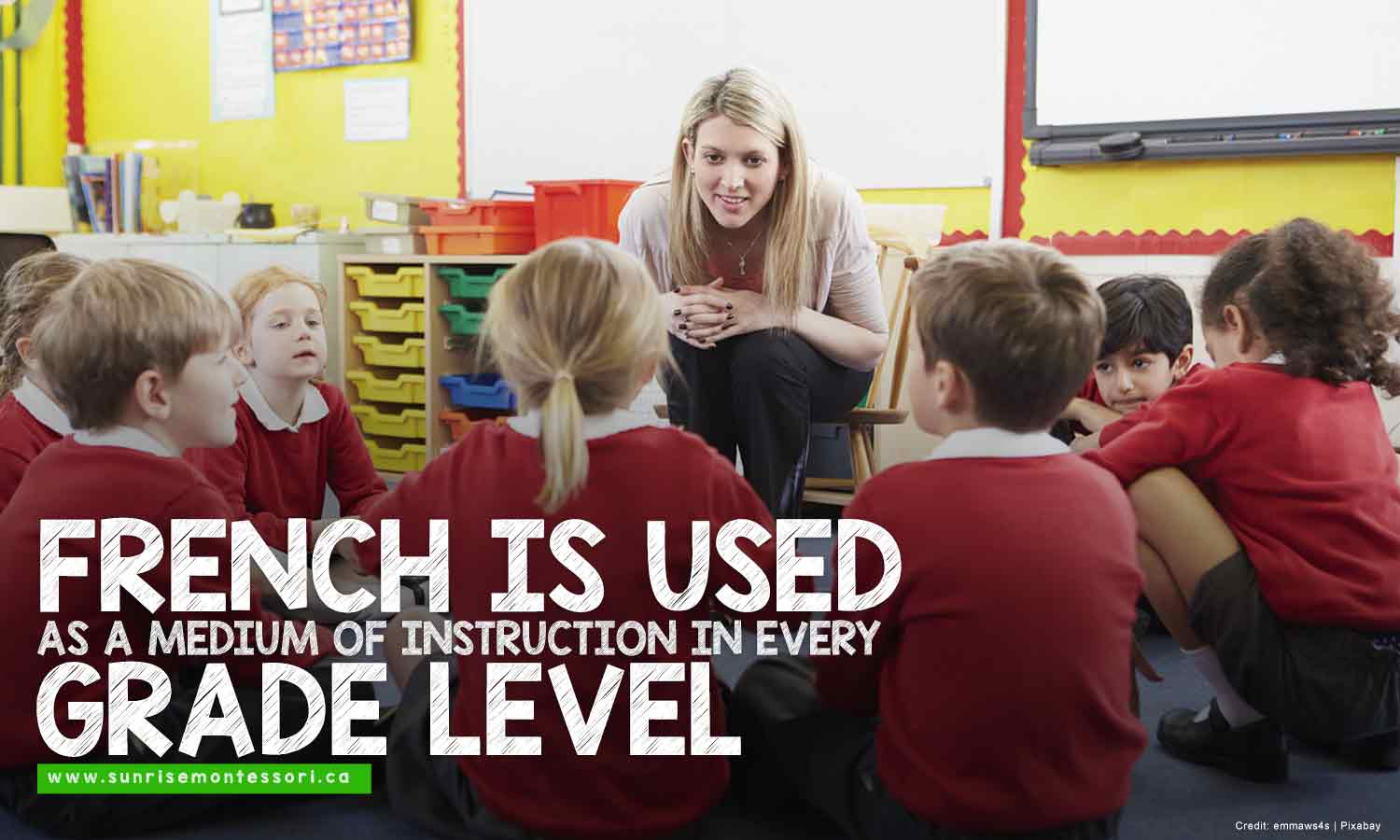 French immersion programs in Ontario usually starts no later than Grade 1. In other school boards, it starts as early as Senior Kindergarten.

Children receive instructions solely in French from Kindergarten to Grade 3.

Grade 4 to 7 students receive about 5 hours of English instruction every week. The use of English increases every grade level but with no less than a minimum of 50% use of French every day.

Grades 8 to 10 students will continue to have French class and study math, science, and social studies in French. The other subjects are in English.

Grade 11 students continue to learn French in social studies and French class. All other subjects are in English.

Finally, Grade 12 students will study all other subjects except French in English, except French. Hence, the high level of French proficiency does not affect the student’s English proficiency or achievement in any academic subjects.

Benefits of Enrolling Your Child in French Immersion Program

The main purpose of French Immersion is to give Anglophone students the opportunity to become bilingual. While it has its share of critics, various studies have shown that the immersion program is suitable for any child. Enrolling your children in French immersion can open many doors to success.

Here are some of the most common benefits of French Immersion: 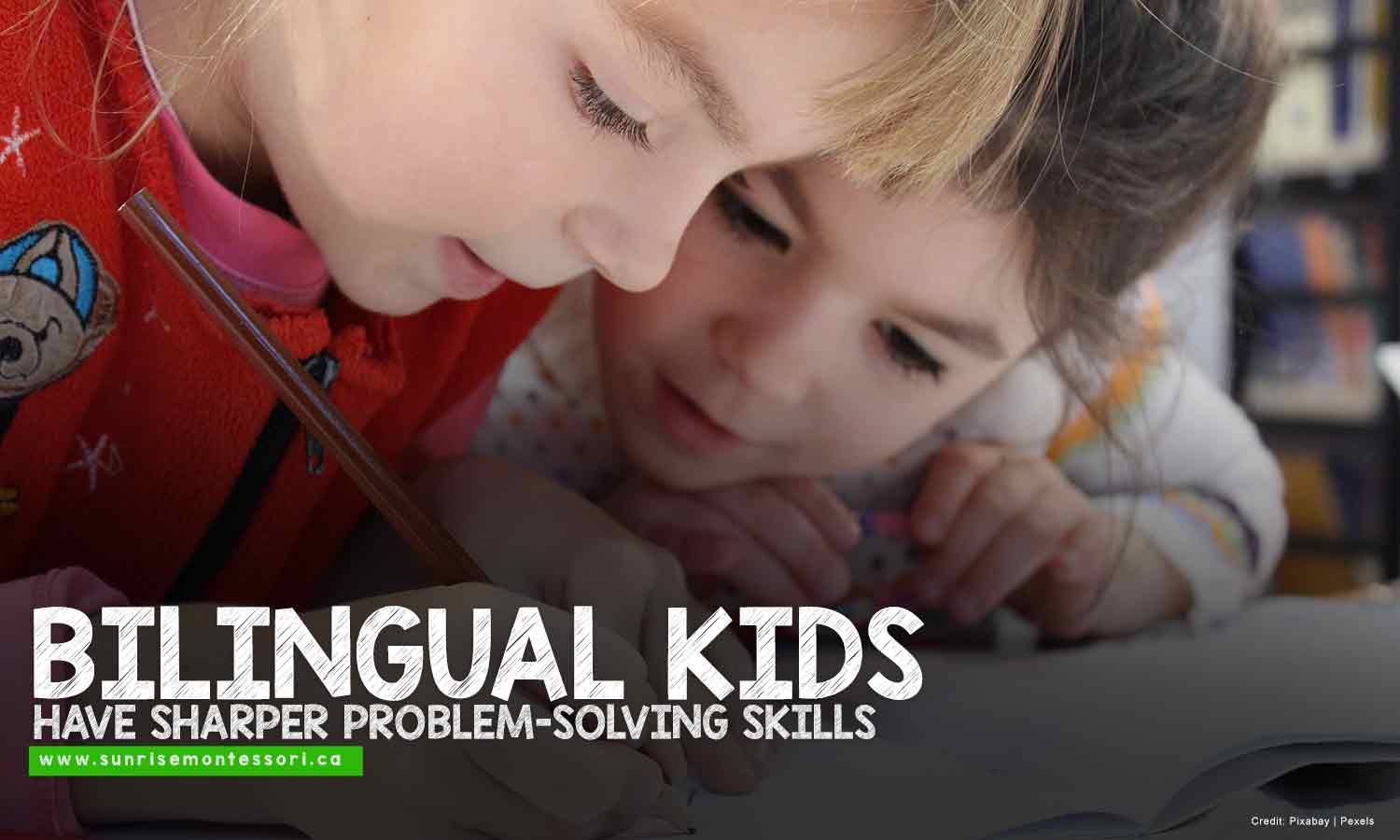 Studies have found that learning a new language at an early age, especially between 5 to 7 year old, helps improve your child’s cognitive skills, such as reading and problem-solving. Being bilingual also enhances the development of critical and creative thinking skills. If your child experiences several challenges learning 2 languages, don’t worry. Some studies report that their cognitive flexibility will increase later in life. This simply shows that being bilingual or multilingual gives the ability to better adapt and deal with unfamiliar circumstances in their adult years. 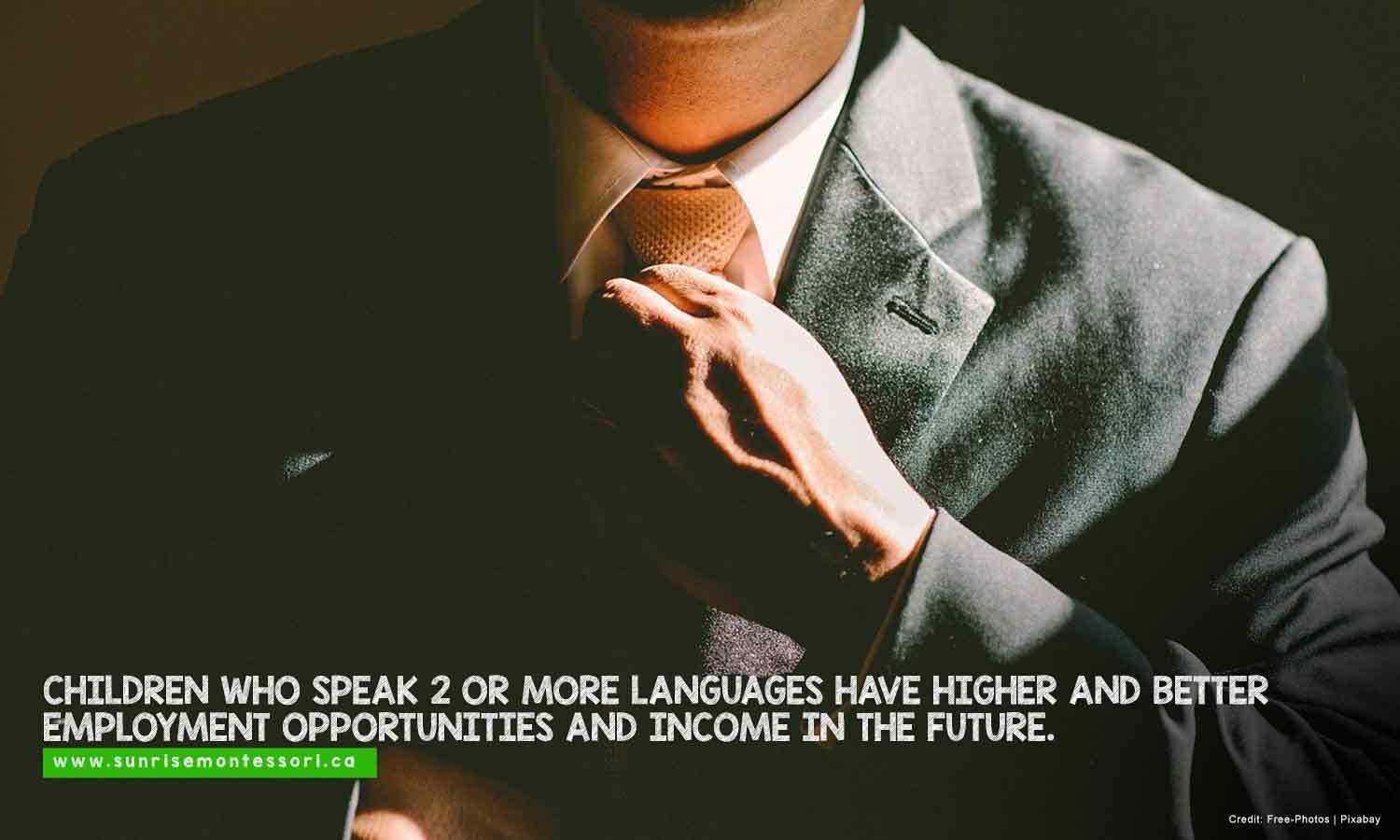 Your child’s proficiency in both English and French language opens up better educational opportunities. This enables them to attend post-secondary institutions or universities. It also paves the way for career advancement and higher employment rates. Canada alone offers about 67,000 bilingual jobs. Employees who speak both French and English are also reported to have a higher income, earning almost 10% more, than their monolingual counterparts.

Being able to speak French does not simply increase your child’s future travel options (within Canada and other 28 French-speaking countries), but it also helps expose your child to more cultures and broaden their global view.

Enrolling your child in French immersion teaches them to communicate their thoughts and express themselves better than those who only speak a single language. Additionally, learning a different language also makes your child a sensitive communicator. They are able to understand and respond well, make them respectful of cultural differences, and enable them to communicate effectively with others of diverse backgrounds.

Supporting Your Child in French Immersion

It is normal for young children to experience difficulty coping with learning a new language. However, the same problem can occur when developing their English proficiency. Young children require learning assistance whether they are in an immersion class or in a regular English program.

As parents, you have an extremely important role to play in supporting your child’s success in French immersion. It does not matter what language you use in your home. There are a lot of simple things you can do to help them practice their French-speaking skills.

Here are a few tips to help you support your child’s learning:

Hone your child’s reading and writing abilities to develop their listening and speaking skills. These skills are interconnected and it is the goal of the Ontario French immersion program to strike a balance between them. Oral communication skills, such as listening and speaking, are considered to be a primary factor in learning a second language.

Supporting the development of your child’s oral communication skills improves their diction, tone of voice, volume, and body language, allowing them to communicate with precision.

Let them wonder about the things they see and hear, inspire them to pay attention to small details, and discuss cause and effect when the need arises.

Teach your child how to learn effectively at home and at school in both languages. Your children should understand that learning can be achieved in different ways and under different conditions.

Allow them to explore various learning strategies (like using organizers, repeating or restating words, and highlighting key points); find out which works best for them. Create a good learning environment by removing distractions and organizing the workspace. It is also crucial to provide them with learning resources, such as a dictionary, thesaurus, word webs, and other reference tools.

Learning the French language is increasingly viewed as an asset today. Enriching your child’s language development can have a tremendous impact on their success. Supporting them in French immersion enables them on an exciting journey to becoming an accomplished bilinguist.

Sunrise Montessori School is one of the top-rated private schools in Markham that supports children in becoming effective French communicators. We offer summer camps, extra and co-curricular activities to support French learning. Call us today at (905) 477-2833 to give your child a great head start in life with our professional childcare services.

8 Ways to Foster the Love of Reading in Your Kids

This website uses cookies to improve your experience while you navigate through the website. Out of these cookies, the cookies that are categorized as necessary are stored on your browser as they are essential for the working of basic functionalities of the website. We also use third-party cookies that help us analyze and understand how you use this website. These cookies will be stored in your browser only with your consent. You also have the option to opt-out of these cookies. But opting out of some of these cookies may have an effect on your browsing experience.
Necessary Always Enabled
Necessary cookies are absolutely essential for the website to function properly. This category only includes cookies that ensures basic functionalities and security features of the website. These cookies do not store any personal information.
Non-necessary
Any cookies that may not be particularly necessary for the website to function and is used specifically to collect user personal data via analytics, ads, other embedded contents are termed as non-necessary cookies. It is mandatory to procure user consent prior to running these cookies on your website.
SAVE & ACCEPT